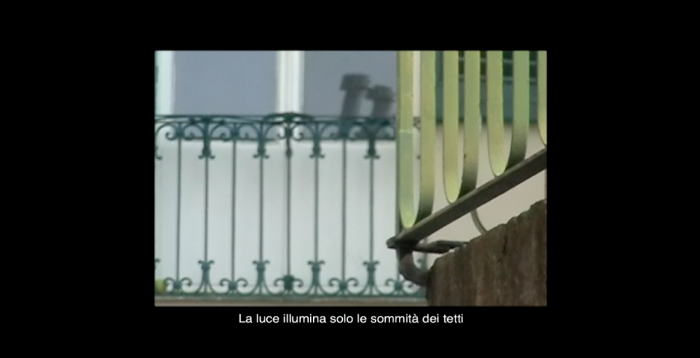 Francesco Rosso and Petra Kapš (alias OR poiesis) spent a month in the city of Genova as a result of the prize won at the Etherea Art Gallery. During the residency they engaged in an intimate dialogue of video footage, spoken-written words and sound recordings, headed to explore their most inner emotional states in relationship with the surrounding environment, and with each other. Their shared experiences find physical form in the shared aesthetics of their artistic practices.

Based on the method of constant self analysis and daily rituals, the result of this time spent in Genova gave life to an experimental documentary, combining the concreteness of the city and the mystical, even spiritual aspects ... all through very fleshy subtones of the city: the dialogue between the body of the city with its ancient architectural features, and the myriad of human bodies inhabiting it. Subtle metaphors rose from composing the sequences from intimate realms and architectural details; they emphasize basic interconnectedness among people and the city.

Produced by Francesco Rosso and Petra Kapš during the residency program at Etherea Art Gallery of Genova, Italy